“Where are the 300 people who have disappeared?” We have been asking this everywhere.

It was the day when a reckoning was demanded from those who have abducted people and had them “disappear”.

Only a few weeks before, the body of Aysenur Simsek had been found. She had been abducted and “disappeared”.

The fighters of the armed propaganda unit “Ibrahim Yalcin” leave the house very early on this day. They want revenge for Aysenur Simsek and hundreds of other people.

The fighters of the armed propaganda unit arrive at their target at 0715. Their target is the police who guard the central headquarters of the DYP (True Path Party, a rightist party led by Tansu Ciller). The DYP was and is one of the chief perpetrators of massacres and dissapearances, and the police bear the same responsibility. These two forces which are against the people work together to achieve their aims.

One of the fighters goes forward, the other two follow him. As they approach the police, they act as though they are going to ask directions, so as not to appear conspicuous. Right at that moment is the time to make an attack. The fighters suddenly take out their guns and their anger pulls the trigger. Anger for Aysenur and 300 disappeared… Rustu Erdem, a guardian of the system and a member of the police force, was killed. Haci Kamil Koc was severely wounded.

Now was the time to withdraw.

The guerrillas of the Revolutionary People’s Liberation Front (DHKC) head away from the action, in the direction of Piyalepasa. On Piyalepasa Boulevard, they meet another group of policemen, however: they become involved in a clash with them, leave their vehicle and head for the Mahmut Sevketpasa Neighbourhood

Sibel and the two other fighters go along the street, which leads to Fuat Soylu Primary School, and they assess the situation. They have carried out their task. Now they have another. Either to break out of police encirclement, to secure the safety of the fighters, or to fight to the last bullet. This is what they learned. This is the form their struggle takes.

When they have reached the corner of the school, Sibel says to the others that they should leave this area, and she would give them cover. “This is not a request, it is an order. You will go,” she said. While the two guerrillas head off in different directions, following her orders. Sibel goes behind a red and multi-coloured lorry, situated outside the school, and waits. “She went from behind the lorry, fired a shot and then went back behind the lorry.”

Witnesses reported this later. A hundred policemen went up the Piyalepasa Boulevard. Commander Sibel, who had taken up position at the lower corner of the school, shot at the approaching policemen in an effort to hold them back, in order to win time for the other guerrillas. While hundreds of police went through the alleys from Piyalpasa Boulevard to the Mahmut Sevket Neighbourhood, the commander began a fighting withdrawal.

The streets were not strange to her. She knew the people in these streets. As an activist, she was familiar with these streets. Since she became a DEVRIMCI SOL supporter, her will to wage the struggle had risen, her enthusiasm had reached its highest point and there was not a single day when she did not go out without a spray can, a bundle of leaflets or a banner.

She fought alone against the hundreds of murderers

She knew the horde of murderers very well. She had been arrested during the occupation of the DYP building in Sisli as a protest against the April 16-17 massacre. Because she was too young she was soon released. But because of her reaction to the torturers she was first subjected to torture, like the other comrades.

Shots are now coming at her from several directions, and she retreats, firing back as she does so. First she takes cover behind the lorry, then behind a white Sahin and turns down Yildirim Street. Sibel goes down the steps leading to the street, sees that the other side of the street is now cut off and then goes into one of the houses.

House Number Three is to be the witness of the heroic resistance by the guerrilla fighter Sibel.

She had learned from her comrades that the people must not come to any harm.

Sibel lets the woman and her children out of the house, so that they do not come to any harm in the armed clash which is about to begin. They go into a neighbouring house.

The police have reached the house and now open fire.

While Sibel was staging a fighting retreat in Okmeydani, street by street, Hasan Levent, who cooperates with the police, has betrayed her whereabouts to the police. Hasan Levent has made himself guilty in the eyes of the DHKP-C and the people. *

The shots the police fire are answered by Sibel with both shots and slogans.

The police shoot and shout out, “Surrender!”

At the same time on the police radio an agitated voice can be heard, “We can’t get to her this way, go to the cars and fetch the hand grenades.”

They are afraid. It is only one person who faces them, but it is not the first time they have had to face a woman fighter of the Front, they have picked up experience and accordingly are afraid. A policeman goes onto the street, shoots and withdraws. Others do the same.

“The fighters of the People’s Liberation Front do not surrender. Surrender, you are the ones who should surrender,” she calls to them. And she also continues the tradition of Ciftehavuzlar and Bagcilar by shouting the slogan:

“You will only get our corpses.”

The people in the quarter observed every moment of the armed clash. Each slogan finds an echo in their hearts. They are astonished to see a young woman resisting hundreds of policemen.

After the police have put on bullet-proof vests, they pluck up the courage to go to the other side of the street and intensify their fire on the building.

Resistance has been going on for an hour

The police climb on the roof and hurl grenades inside. When no more sounds can be heard inside, they go in.

“Actually, you are the ones who should surrender.” This slogan still echoes in the streets.

She was Commander Sibel YALCIN. Sibel YALCIN, who was not afraid to sacrifice herself for her comrades.

Sibel YALCIN, who fought alone against the hordes of murderers, and turned Okmeydani into a battlefield.

She fell and became immortal at the age of 18.

Greetings to you, comrade

After Sibel was killed, Hasan Levent was punished by fighters of the DHKC. 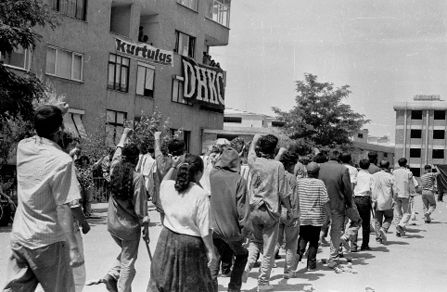 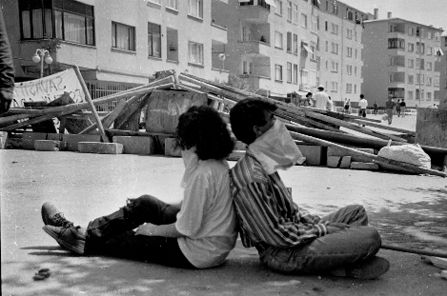